The following is an overview of the required documentation, processing times and related fees involved with a marriage-based Green Card. Obtaining lawful permanent resident status by marriage to a U.S. citizen is a multi-step process.

The first step of the green card process involves the filing of Form I-130, Petition for Alien Resident, by the U.S. Citizen spouse with U.S. Citizenship & Immigration Services (USCIS). This involves the preparation and submission of a comprehensive package to USCIS emphasizing the legitimacy of the marriage. It is, therefore, imperative to submit evidence of the bona fide relationship through marriage certificates, proof of termination of previous marriages, and documentation of your relationship.

The second step of the immigrant visa process is asking the government to create an actual green card for an applicant based on a bona fide marriage to a U.S. citizen. There are two ways to do this. Adjustment of Status is a procedure that allows an applicant to become a lawful permanent resident without having to attend an immigrant visa interview outside the U.S. By contrast, with Immigrant Visa (Consular) Processing, the immigrant visa interview takes place at an Embassy or Consulate outside the U.S. that has jurisdiction over the beneficiary. Both methods of filing have advantages and disadvantages, and a decision should be made based on the applicant’s location at the time of filing, future travel and work plans, and the couple’s preference for processing.

For many married applicants, staying in the U.S. and adjusting status is the preferred way to obtain permanent resident status. If the beneficiary spouse has made a lawful entry into the U.S. in nonimmigrant status and is currently residing in the U.S., he or she may be able to apply for Adjustment of Status (AOS). It is typically required that applicants for AOS maintain lawful status in the U.S. For foreign national spouses who have entered under ESTA or as B-2 visitors, this strategy must be very carefully considered, as the government gives a very high level of scrutiny to AOS applicants who have entered as temporary visitors.

Under this option, the paperwork relating to the foreign national’s eligibility for AOS is usually filed with USCIS at the same time the I-130 petition is submitted. Additionally, to establish employment eligibility and to preserve international travel privileges, other forms are also submitted with the application.

Since the I-130 petition is submitted together with the AOS application, this is typically a significantly faster means to obtain a green card when compared to Consular Processing (explained below). Upon approval of the I-130 petition, the applicant and his/her U.S. spouse will be scheduled for an interview at a local USCIS office. Upon a successful interview, the green card will then be issued.

If the beneficiary spouse resides abroad and meets certain statutory requirements, he or she may pursue Immigrant Visa Processing (IVP), also known as Consular Processing.

First, the I-130 petition is filed by mail with USCIS. Once the I-130 petition has been approved, USCIS will then send the case to the National Visa Center (NVC). The applicant will then be required to submit an additional application and documents for the NVC’s review. These items include biographic documentation of the applicant, including his/her birth certificate, police clearances, previous divorce certificates, etc. Once all of the requirements are met, the NVC will then forward the application to the U.S. Embassy or Consulate having jurisdiction over the foreign spouse’s place of birth. The Embassy/Consulate will then schedule the foreign national for their interview date along with instructions for undergoing a required medical examination.

After the interview, the foreign spouse will receive his or her immigrant visa and can enter the United States as a lawful permanent resident.

Because this is a family-based case, the U.S. citizen must complete an Affidavit of Support on behalf of the foreign spouse. The U.S. sponsor must be able to demonstrate that the foreign spouse has enough financial support to live without concern of becoming reliant on U.S. government welfare. The required supporting documentation includes income tax returns, W-2 forms and evidence of current employment. Depending on your financial situation, we may require additional supporting documentation including bank statements and evidence of assets. The applicable amount is dependent upon the U.S. citizen’s household size (including the foreign national spouse). If the U.S. citizen spouse does not have enough income and/or assets to meet the government’s income requirements, a Joint Sponsor or Household Member may be used. We can make this determination upon a review of your three (3) most recent income tax returns. 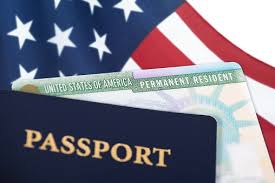 US citizens have access to 184 countries and territories without a travel visa or with a visa on arrival.

Once a green card is issued, the individual is now considered a “lawful permanent resident” and is allowed to reside and work in the U.S. on a permanent basis. Although this status is permanent, the actual card (Form I-551) expires every ten (10) years and must be renewed much like a driver’s license by submitting a form and photos to USCIS.

If you have been married for less than two (2) years at the time lawful permanent resident status is granted, the foreign spouse will be given conditional status which is afforded for two (2) years. Prior to the two (2) year anniversary of the green card being granted, the couple must apply to remove the conditions on residency. This acts as the government’s “insurance policy” to make sure that the couple is still married and living together in a bona-fide relationship. Provided the green card holder remains married to his or her U.S. citizen spouse and meets the physical presence requirements, he or she may apply for U.S. citizenship once they have been a permanent resident for three (3) years.

There are two sets of fees for this process – legal fees and government forms. Legal fees will be discussed during your consultation. USCIS charges $535.00 to process Form I-130. Government filing fees are approximately $610.00 (subject to change based on applicant’s citizenship) via the Immigrant Visa Processing method and $1,225.00 for the Adjustment of Status method.

Berardi Immigration Law is a full-service business immigration law firm that provides top-notch services to corporate clients and individual business professionals. Founded as a solo-practice in 2005 by Managing Partner Rosanna Berardi, the firm has grown exponentially over the years.

Connect with Jennifer to discuss your immigration options and gain more insight on living in the United States.